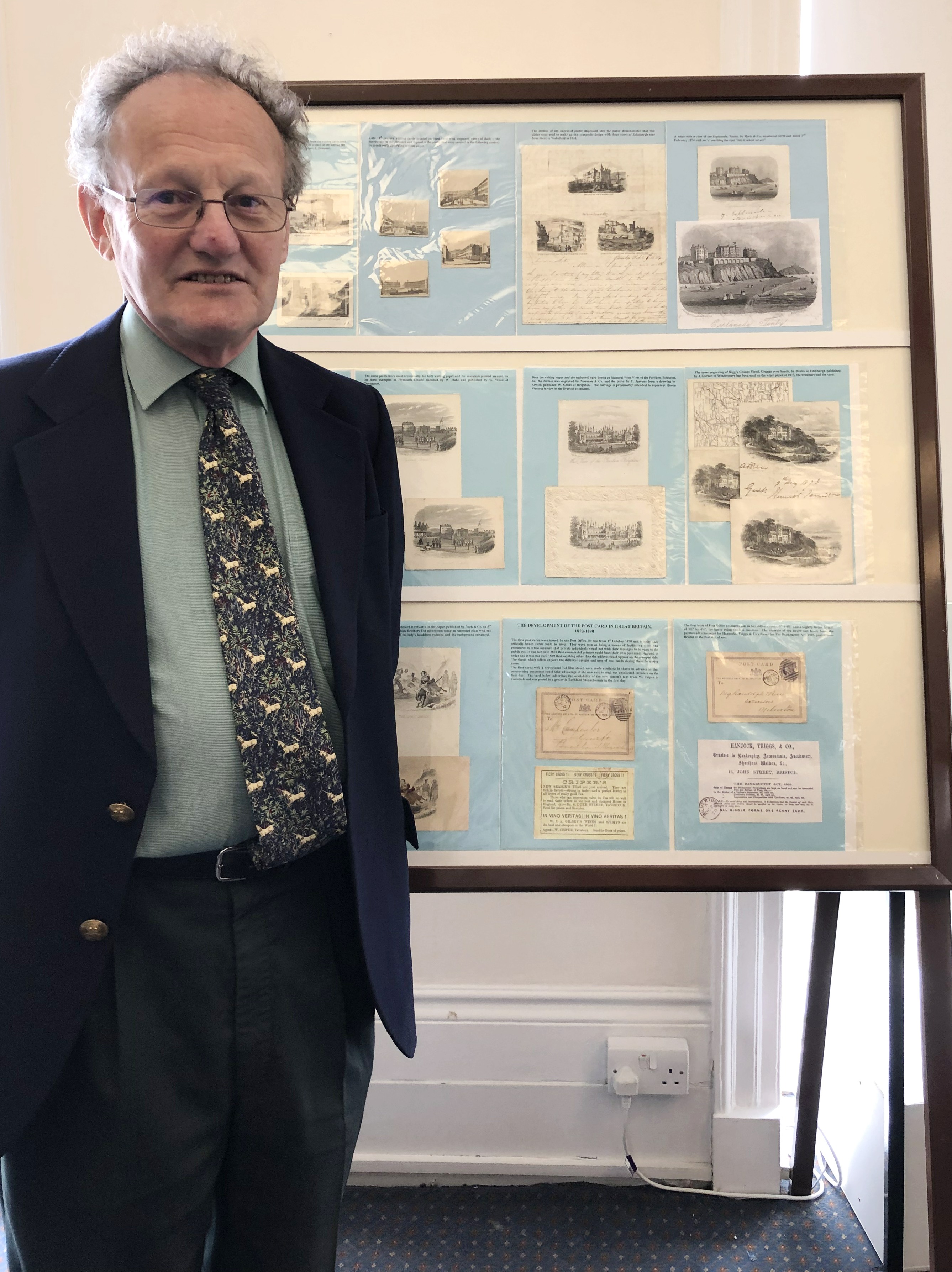 In the morning John Scott displayed The Evolution of the Postcard, stunning everyone with his breadth of knowledge and the material shown. The origins of postcards go back to the late eighteenth century. Although rarely used in Great Britain, on the Continent topographical visiting cards were used, consisting of a view with a space at the bottom for the bearer’s signature. Manufacturers later used the printing plates to make notepaper headed with these vignettes. Sending letters on the notepaper is the forerunner of the postcard annotated with a ‘this is where we are staying’ note. Unfortunately much of this notepaper has been destroyed, being cut up for the Victorian vogue of scrapbook making.

On 1st October 1870, following the introduction of the first special reduced postal rate for postcards, the first real postcard was sent. Early postcards were intended for trade and commerce (who would want to write a personal message where it could be read by anybody?) and consisted mostly of advertisements, shipping schedules, confirmatory orders etc. In 1870 alone 75 million postcards were sent, causing the Post Office to investigate more efficient means of cancelling them, including Sloper perforations. From 1872 onwards it was possible for firms to take their privately-printed cards to Somerset House to get them imprinted with stamps.

Gradually postcards reached a popular market with cards issued celebrating Christmas, birthdays, Valentine’s Day etc. Popular on the Continent were ‘Gruss Aus’ (“greetings from”) cards, many being printed in Saxony. Early cards were ‘court’ size, much small than today. Tourism views were popular, including hotels, sights such as Vesuvius, and shipping lines where the card was at the top and the menu underneath. Photographic cards featured events, serious as well as light, such as the Messina earthquake and the Cologne flood.

One section of the display featured postcards which fell foul of Post Office regulations and were surcharged letter rate. The card could be too thick. It might have extra things stuck on such as tinsel, ferns, feathers or seaweed, rendering no longer just a card. A vogue for novelty postcards resulted in ones made from peat, jute, wood, linen, leather, celluloid, aluminium and silk. Aluminium was a problem as the postmark ink would not adhere to the ‘card’ so they were to be sent as enclosures. Special envelopes were designed for silks. Other novelties included panoramic cards (decidedly oversize), hold-to-light, perfumed (with attached sachets), stereoscopic, audible – press the card and you get barking, hooting etc., and with attachments, in one example a frankfurter. Cards could be novelty shapes, but if so they went letter rate.

Reply paid cards were introduced in 1883, but could only be sent abroad to countries which had bi-lateral agreements (hints of Brexit!). Letter cards were introduced in 1892 thus allowing for messages to remain private. At first blank, these later had pictures; and these too relied on bi-lateral arrangements. Under Post Office rules until 1897 it was forbidden to write a message on the address side; later split backs were printed. Some countries banned stamps affixed to the picture side. There were strict rules covering redirection: they could only be redirected free if forwarded within one day of delivery, later than that and they would be surcharged. If a card had been ‘tampered with’, perhaps by adding a further message, it would not be redirected.

The display of 132 sheets covered all these types of card and more, and, John explained, barely scratched the surface of his collection. It was a feast for postcard collectors, for postal historians, and for those interested in social history. In sum everyone loved it. 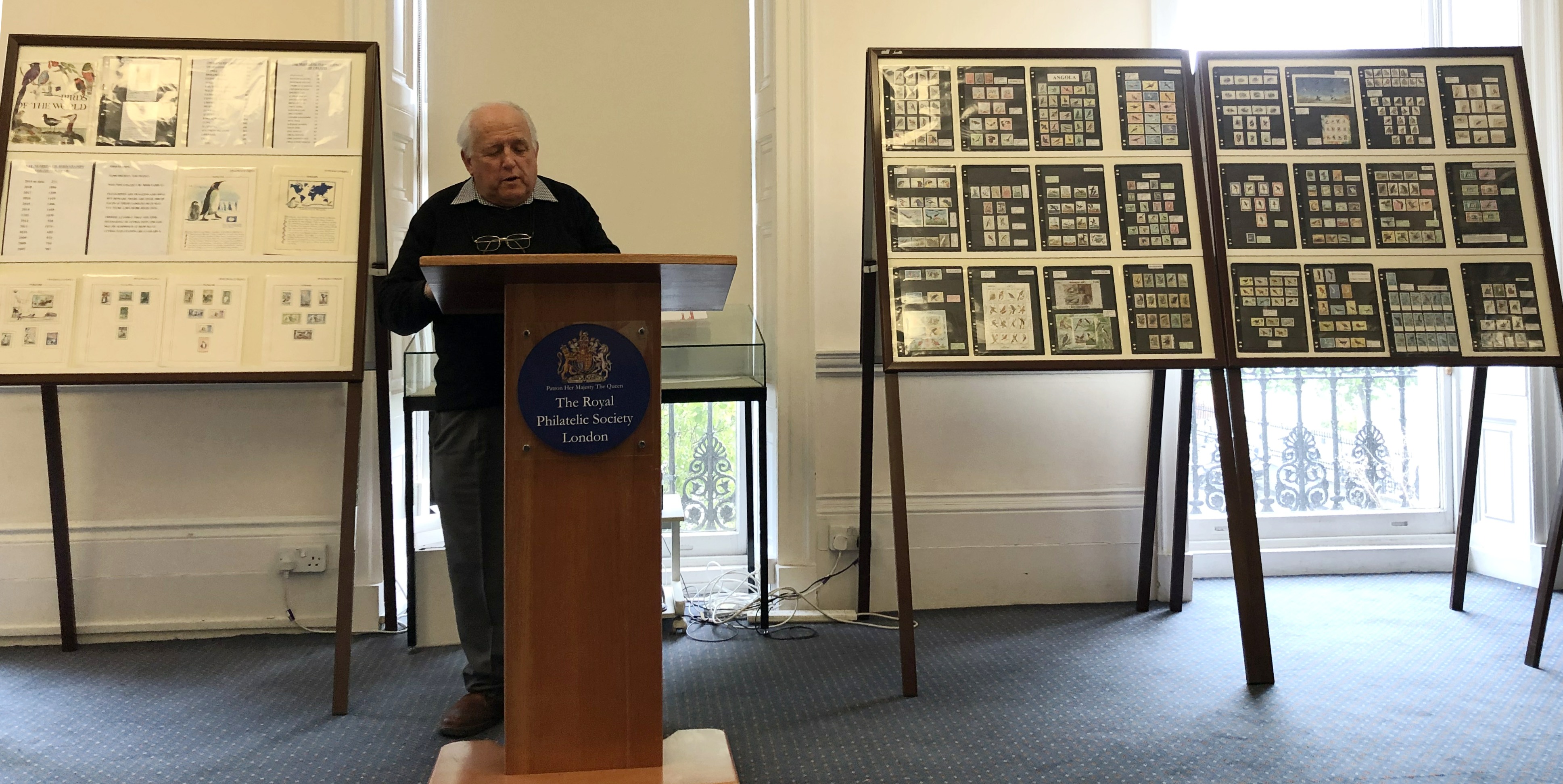 After lunch we were given a very different approach to collecting. Like so many of us Tony Statham, Chairman of the BTA-affiliated Bird Stamp Society (www.birdstampsociety.org), was prompted to start his thematic collection because of an existing interest. He was both a keen ornithologist and collector of bird books and came to see birds on stamps as ‘miniature works of art’.

There are 10,000 bird species in the world, in every environment, and about half of these are represented on stamps, plus seventeen extinct species. There are different ways of collecting the subject, perhaps by family, such as the penguin, which has over 1,000 stamps dedicated to it. You can collect one specific bird, such as the robin, popular as much for its association with Christmas as for its ornithology. Or you could collect one species found in one country. A different approach is to collect by country of issue, but here you run into the problem of countries increasing their income by issuing stamps on popular topics which have no relationship with that country; you will find plenty of penguins on stamps of African countries. Then of course there is the decision on whether to spend money on ‘cinderella’ countries like Sharjah: philatelically unacceptable but still of interest since as Tony put it “someone somewhere has designed, drawn and printed it. It is still a work of art”.

Having decided how to collect you then need to decide what to collect. Do you restrict yourself to real birds, or include symbolic, stylised or heraldic representations? Additionally, many catalogues of bird stamps exclude chickens, pigeons and ducks, particularly unhelpful to the collector of racing pigeons. (Incidentally, it is claimed that there are three chickens for every human on the planet). The last issue of Stanley Gibbons Birds on Stamps was issued in 2003; however there is an excellent website Theme Birds on Stamps at www.birdtheme.org/ which has a regularly-updated list by country with full details of issues plus images.

Another factor to take into account is the sheer number of bird issues annually: currently about 1,000 new stamps each year. ‘Large and showy birds’ are the most popular, the top one being the American Bald Eagle (which isn’t bald, it has white feathers). Many of these issues related to the Apollo 11 moon landing (“the Eagle has landed”). Cockerels feature a lot since the Chinese horoscope has the Year of the Rooster (such stamps are presumably ignored by bird stamp catalogues).

If you would like a small, contained collection you could limit yourself to illustrating the Christmas carol The Twelve Days of Christmas. Add all those up and there are 27 birds from six different species.

Tony’s own collection is certainly not limited; he brought along part of the section arranged by country of issue, with details of each stamp recorded, an A – Z arrangement (very few letters are impossible), including much sought-after stamps such as the Falkland Islands 1933 five shilling King Penguin. While it did not include perhaps the rarest of all bird stamps, the Switzerland 1845 Basle Dove, (understandably since it recently fetched £40,000 at auction!), it was still an eye-opener for the audience on the enormous range of stamps of all periods. Some hand-written albums with beautiful illustrations were also displayed, and a selection of catalogues. This was a thoroughly comprehensive talk and display which opened our eyes to the breadth and depth of bird collecting. 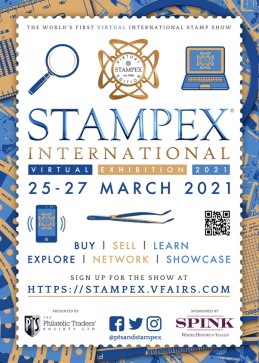