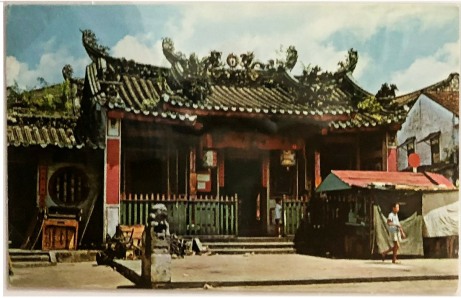 In the aftermath of the liberation of Borneo in 1945 there was little demand for picture postcards. Reconstruction, repatriation of troops and civilians and shipping of essential supplies occupied all shipping during the following years. It was not until 1947 that any passenger ships were released from military service, and they had to undergo extensive refurbishment before being returned to service. With no evidence of any postcards sent in the 1940s, usage was still rare during the early and middle 1950s. There is no evidence of pre-war cards re-emerging for use, but only new photographs. With no availability of printed postcard photo paper all the early cards have plain backs. The display featured the work of two major photographers.
Lim Poh Chiang was born in 1924 at Lembangan, Sibu, to Chinese immigrants. After the war he was sent to Singapore to attend the Seventh-Day Adventist College, which was where his love of art and interest in photography developed. When he returned home he had his first camera, a Rolleifleix, and he became a founder member in 1952 of the Sibu Photographic Club. Chiang’s work focused on the peoples of Sarawak living around the Rejang River.
Ken Foo Wong was born in Sarawak in 1916. His father was a Chinese rubber planter and he became interested in photography as a youth. His legacy is a wonderful record of Borneo and Singapore during the colonial and early independence eras. He established the Anna Photo Studio in Kuching in 1937. He is best known for his photographs of the Iban and Dayak peoples of Sarawak, illustrating their traditional lifestyles.
In the 1960s two Singaporean companies started producing cards of Sarawak. S. W. Postcard Publishers (known to be Sing Wah and Co) focused on images of buildings and scenes. A.S.M.K. & Co Postcard Publishers produced two series of postcards. They appear to have taken over production of Lim Poh Chiang’s work, particularly focusing on Dayak women; and produced a second series devoted to scenic views and prominent buildings. All of these postcards provide a valuable record of a society which had thrived for centuries and has now completely disappeared. Tribal people have moved into towns and an entire way of life has gone. These may have been postcards designed for the tourist market, but they provide a valuable historical record.