The Statue Of Liberty: A Symbolic Theme

This article first appeared in Themescene no. 116.

THE STATUE OF LIBERTY: A SYMBOLIC THEME

Jon Matthias looks at the USA’s most famous landmark 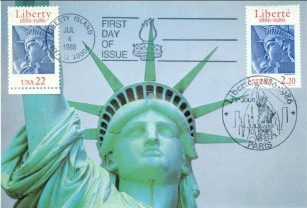 I collect the Statue of Liberty on stamps. It appears quite a narrow theme, although I have over 400 stamps from over 100 postal issuing authorities, and I’m always discovering more.

Then I made the mistake of looking on eBay and discovering there were loads out there. I still have several to find. When we start talking about meter mail, cancellations and cachets, the numbers go up again.

I have some theories as to why the Statue of Liberty appears on so many stamps. The Statue of Liberty has become one of the most recognised landmarks in the world since it was built in 1886. Officially called ‘Liberty Enlightening the World’, it was the first sight of the USA seen by hundreds of thousands of immigrants to the New World, and subsequently a major attraction for literally millions of tourists. As such it has become a convenient shorthand symbol for New York, or the United States of America. In the limited space available on a stamp, if a designer wants to represent the Big Apple or the USA, odds are that the Statue of Liberty will feature. 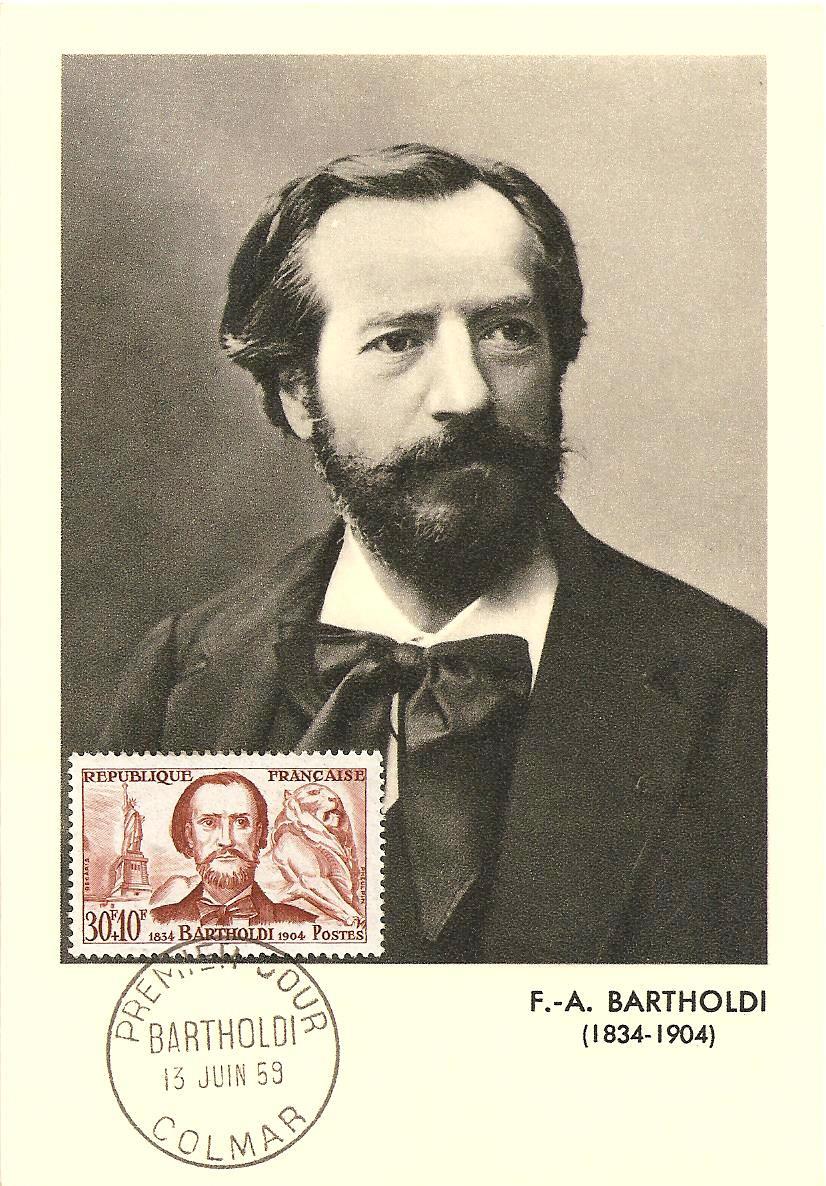 The Statue was designed by an eccentric French artist, Frédéric Auguste Bartholdi, and paid for by charitable donations as a ‘gift of friendship’ from the people of France to the people of America. Bartholdi apparently modelled the Statue’s body on his wife, but used his mother as the model for the face, which is perhaps a bit unsettling.

Bartholdi could easily be the subject of a thematic collection himself, as could Gustav Eiffel, who designed the internal steel framework that keeps the statue up. Of course, Eiffel’s most famous creation in the centre of Paris is one of the few landmarks to rival the fame and attraction of the Statue of Liberty.

Another key personality linked with the statue is Joseph Pulitzer, who gave his name to the most prestigious award for journalism in the world. He raised the funds in the USA to build the base the statue sits upon.

Finding out what stamps and philatelic material exist is the first difficulty to overcome when collecting a very specific theme. Some stamps only feature the Statue in the background design, meaning catalogues don’t mention it. The only thematic dealer I’ve met with a ‘Statue of Liberty’ section said he had just sold all his stock! It can be frustrating.

I’ve been helped in my collection by joining the British Thematic Association, with some members supplying me with material. Joining the BTA also gave me access to the American Topical Association list for the Statue. But even that list is incomplete. I know, because I have stamps that aren’t on their list.

EBay is another source of information, and more importantly colour images. I have used them to construct my own personalised catalogue, which doubles as a ‘wants list’, for things I thought I could find cheaper offline, and often have. 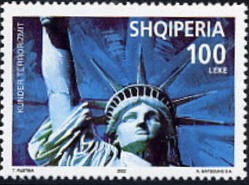 Events play a key role in the issuing of stamps featuring the Statue of Liberty. For example, New York has hosted two World’s Fairs. In 1939-40, France’s World’s Fair stamps featured Lady Liberty. A variety of nations marked the 1964 World’s Fair with stamps that feature the Statue, including several Arab countries like Egypt, Dubai and Yemen. ‘First flights’ also meant some countries issued stamps with the Lady on, notably Switzerland (1947) and Iran (1975).

But the main events that prompted the most stamps featuring the Statue of Liberty are:

the American Bicentenary in 1976 (Anguilla, Bangladesh, Morocco, Niger, Samoa, San Marino, and Sri Lanka, used the Statue in their designs);

the centenary of the Statue itself (marked by over 100 countries, including a joint issue between the USA and France);

the one-year commemoration of 9/11, in 2002 (Albania, Cook Islands, Mongolia, Paraguay, and Zambia, were among the countries involved).

The Bicentenary stamps were particular to the country producing them, unlike the later events mentioned above that tended to be ‘omnibus’ style issues, with names of countries interchangeable on virtually identical designs.

However, the mass-production of these stamps did lead to one of the more interesting philatelic artefacts of the Statue’s centenary – a se-tenant strip featuring stamps of eight different countries that was apparently produced to aid the manufacture of first day covers. This strip includes a stamp from St Lucia that wasn’t sold elsewhere as St Lucia decided to opt out of the omnibus issue and produced its own unique stamps. 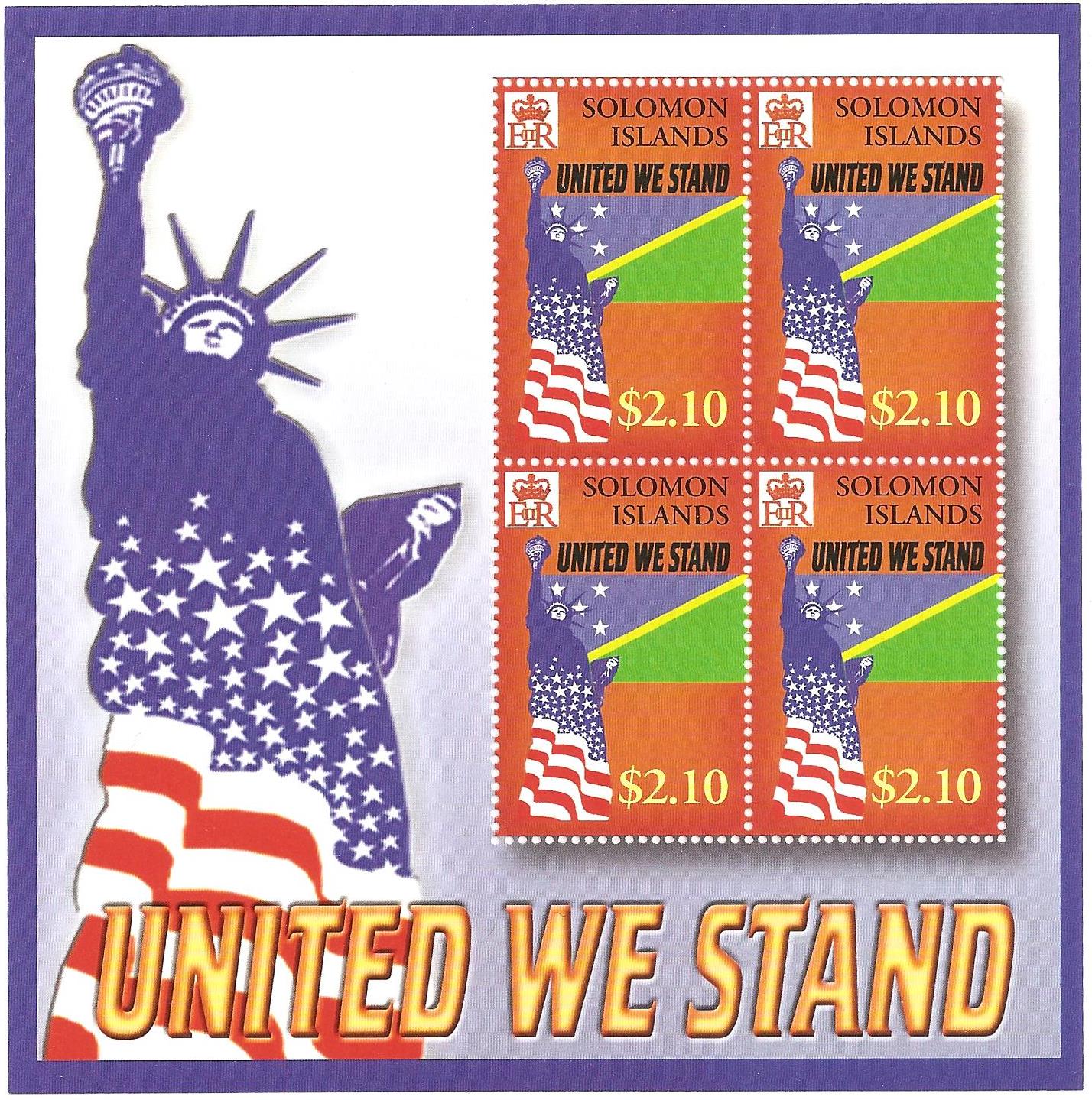 The 2002 ‘United We Stand’ theme also saw very similar stamps and items produced by many different countries. While some countries used pictures or photos of the attacks on the Twin Towers themselves, many also opted to use the Statue of Liberty, again highlighting its handy use as a symbol for stamp designers.

‘United We Stand’ miniature sheets sold by a variety of nations incorporated the Statue draped in an American flag alongside their own flags. The quality of design and print was poor, with the image often looking a bit fuzzy, and getting hold of them is awkward, as with many modern issues.

Other events commemorated also create opportunities for stamp designers to include the Statue on stamps. For example, Rwanda’s stamps released when Pope Paul VI visited the United Nations in New York in 1965. Presidential visits have also prompted the use of the Statue. When President Truman visited Brazil in 1947, the second Brazilian stamp to feature the Statue was issued. When Liberia’s President Tubman visited the USA in 1961, the Statue was a key part of the design. 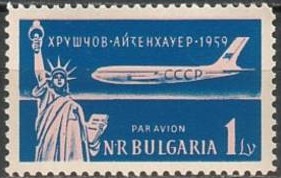 Perhaps the most interesting use of the Statue in the ‘state visit’ context was Bulgaria’s issue to celebrate Soviet President Khrushchev’s visit to America in 1959. This was the second time the Statue had appeared on a Bulgarian stamp while the country was ruled by communists (the first time was to celebrate a stamp exhibition in 1947). Was this a deliberate act by a subversive designer to include an image of freedom and liberty on a stamp? I’d like to think it was.

You’d think that such a globally recognised symbol wouldn’t be the case of mistaken identity. And yet in 2011 the US Postal Service did just that, using a photo of a replica in Los Angeles in a close-up on their ‘Liberty Forever’ stamp. (They also used the photo without permission and ended up getting sued by the photographer!). 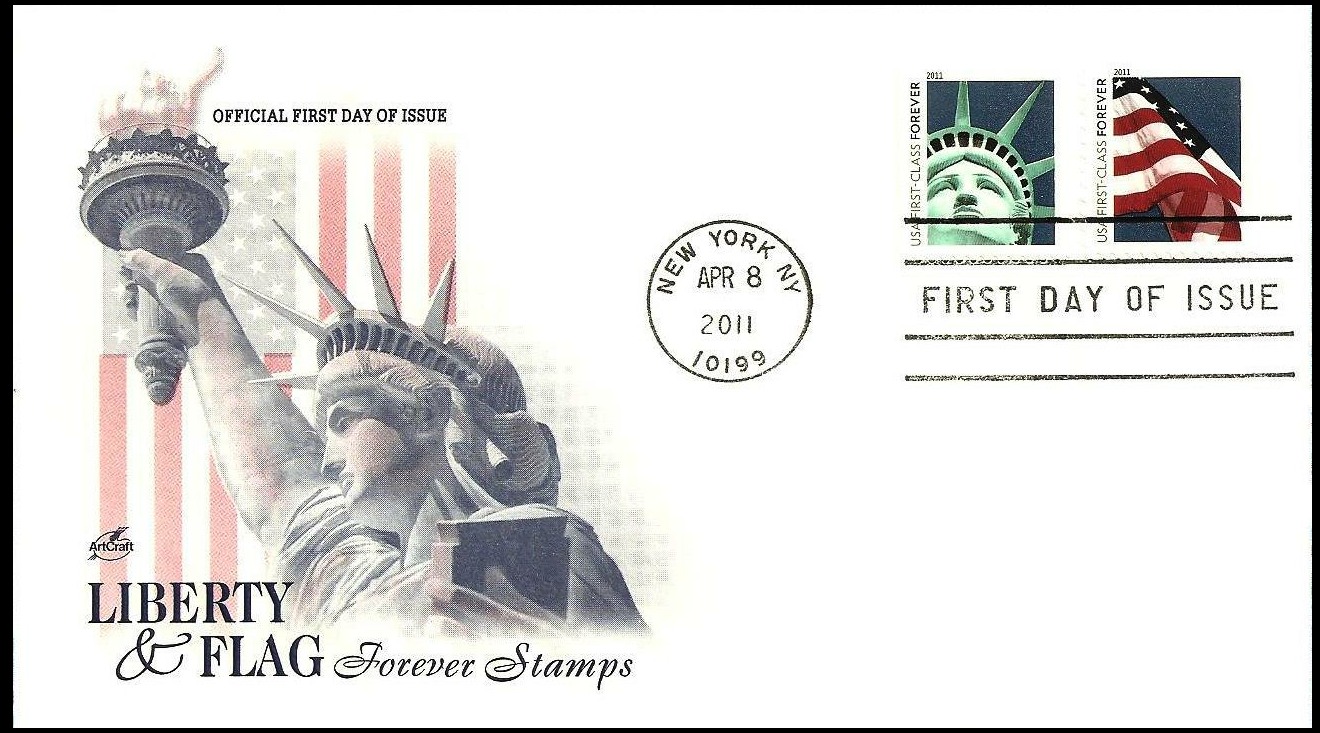 And finally, collecting a theme like this gives me an excuse to buy all kinds of weird and wonderful covers, as long as the Statue of Liberty is present somewhere. It throws up some ironies, not least a recent acquisition of an envelope with Lady Liberty on the stamp, and a hand-stamp indicating it was sent from a resident of a Californian women’s correctional facility, who presumably was not at liberty at all.

I would like to thank BTA members Peter Wood and Margaret Morris for their support with my theme. If any other BTA members have items they think may interest me, please email me.